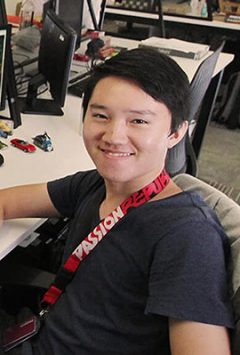 …and the painting shows the moment where I miss her the most, which is when I travel back to meet her […]

The Malaysian art scene often goes unnoticed in the art community. After all, there’s only a handful of names that we all know and love. Incidentally, we have interviewed Puppeteer Lee in the past, but we didn’t get a chance to ask him what it’s like to be an artist in his home country. This is why we interviewed Kael Ngu, a Concept Artist from Kuala Lumpur, Malaysia. “I feel that there will be many more young aspiring artists coming out of Malaysia in due time, and the culture will get stronger as time goes by.” said Kael. The artists all know each other, and they collaborate on various art-books, two of which have already been published. Of course, their day-to-day tasks at work keep them busy, but you can look forward to more collaborative projects by Kael and the others in the near future.

As you read through the interview, you will learn all about the tight-knit community of artists in Malaysia, Kael and his journey as an artist, and even a little bit about Kael’s processes. I think that the interview will be especially inspiring for those of you who are aspiring artists, and that’s because you can see how Kael is slowly walking toward success in the world of art.

I’m a twenty-five year old Concept Artist and Illustrator working for Passion Republic, a local game studio. I have been working there for around four years now. As well as that, I have been teaming up with other talented artists to work on our own art-books in my free time!

We’ve managed to publish two art-books so far; Milky Overdrive (2015) – an art-book consisting of digital paintings of babes and machines, and Cheesy Overkink (2016), which is a sketchbook collecting both digital and traditional sketches. Of course, we’re planning to continue publishing more books in the future, here’s to hoping we can do one every year!

I myself have been venturing into traditional inking as of late, working on both commissioned fan-art and originals for clients from various counties. All in all, I guess that’s that for me.

I’ve seen a couple of promotional pieces for Milky Overdrive on ArtStation, it looks like an interesting project. How did it come about?

Thanks! The idea came to us when a few of us were sat together starring at our own library of art-books on the shelves, and like any other creator, we asked ourselves why we didn’t just publish our own too. All seven of us working on the book had our full-time job to deal with, and that means we can only make use of the time after work. This is why it’s taken us so long to create one book. 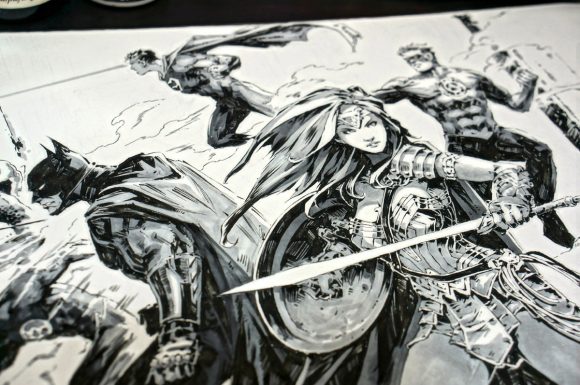 You said that you got into inking last InkTober, right? What made you want to keep doing it after that?

Actually, the local comic books is what made me interested in the medium, and they inspired me to draw comics traditionally for two to three years in the past. Digital art came in after, and I lost track of what I originally liked because digital art was so trendy and fun! I stopped drawing with ink for a long time, and it continued on until InkTober started. I got back into it straight away after that event! 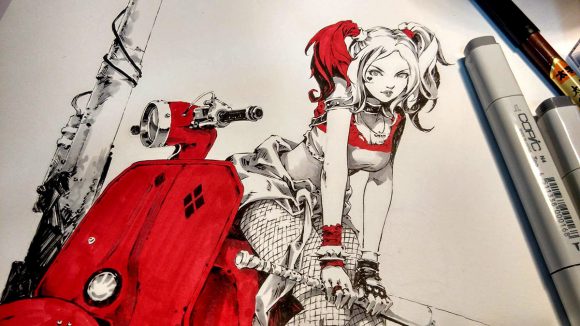 You’ve tried your hand at digital art as well as traditional art, could you outline the ups and downs of each?

This is a hard one. I think that you can look at it and interpret it in a lot of different ways. But that’s okay, let’s try and compare the two! Attempting to do concept art traditionally would take you a long time, so speed is an obvious downside. And the fact that there are no “rules” telling you how you should go about making your concept, makes this a lot worse for traditional art. The end result is all that matters, and time is money. You can’t paint something traditionally and achieve photorealism in a day or two, it’s impossible. However, if you consider the value of the piece itself, you’ll find that the artwork that was made traditionally will be more successful because there’s only one original copy in the entire world. On the other hand, the digital one is easy to replicate, and that causes it to lose a lot of its value. Of course, you can argue against this, but I personally value it in the purest form.

In overview, it’s all about preferences and adapting to certain situations. Both of these have their ups and downs based on the scenarios you choose to use them in, and I really don’t think I could pick a side. 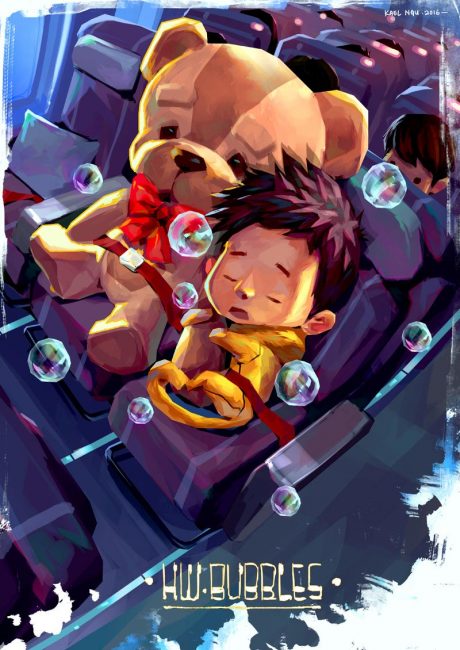 What are your current influences?

My biggest inspiration is Puppeteer Lee! He’s in a lot of the local comics that I mentioned before, and he was actually a comic book artist many years ago. I think that the way in which he inserts really cool technical designs into his work makes him stand out. Next, I love the fact that he does a bunch of other stuff alongside the comics. He can paint digitally and he even sculpts his own toys. It’s really hard to grasp how he can excel at all of those things, but he does!

Of course, he’s not drawing comics anymore, but we can still enjoy his digital artwork because bits and pieces of his old technique are still there. The gritty style that he uses is spot on when he does it. And yeah, this is why a lot of my ink drawings has this dirty, sketchy look.

Walk us through your process from start to finish.

I start off doing little studies of whatever it is that I’m about to draw, from looking at the composition to the anatomy, or maybe even the expressions on the character’s face. It saves me time because I won’t have to erase as much when I get to work on the final piece. Erasing too many times can end up tearing the paper and leaving smudged pencil all over the place!

After that, I lightly sketch on some A3 paper. This will be the guide for me, telling me where I’ll put my ink later on. You can probably guess that this step is a lot faster, thanks in large part to the studies I’ve done earlier. However, the next bit does take quite a bit of time. I have to move on to doing the ink drawing, and that means there’s no redoing anything. I use a single brush pen for the entirety of the inking process. I begin by inking out all of the lines and the details, leaving anything to do with lighting alone for now.

Next, I’ll fill up the darker parts to suggest where the light is coming from, or even to make certain objects pop out. Finally, it’s time for the Copic markers! It’s good to scan the work in and do a test run in Photoshop beforehand if you’re not sure how it’ll look after you apply markers to it. When I’m sure that it will still look good after the markers, I’ll open up the set (Thanks again secret Santa!) and lay it all down. Oh, and sometimes I’d use white paint to cover up any mistakes, but I try to avoid that because I think that my clients don’t really like seeing mistakes on the work!

What a lovely day

Any advice you’ve got for people who’re just starting out and want to work in a style like yours?

I don’t have any strong advice, so I’ll just go with what’s good for me. I recommend you keep drawing, be it a bad sketch or a finished one, the point is to keep doing it. I also don’t see my style as unique quite yet, but I wouldn’t worry about that because everyone’s style evolves as they gain more experience. I think that the most important thing is to find joy whilst you’re doing it. When you’re happy drawing, you’ll subconsciously evolve into something greater before you even realize it yourself.

Can you tell me a little bit about the Malaysian art scene? What’s the atmosphere like over there?

For sure! I always felt like we are all connected with each other here in Malaysia. Everyone is very friendly and humble. Can you believe that I can actually be friends with my idol? Or even an artist like Zeen Chin? And there’s a few more who are already well known throughout our industry. I guess it’s because there aren’t too many artists over here. We have a few outsourcing game studios here as well, and we all know them too. The fact that we all know each other so well is one of the reasons we teamed up to make an art-book together! It’s rare, but we do gather in a nice cafe and have a sketch jam sometimes. We love that. Of course, the cafe doesn’t really like us, but that’s what happens if you hang out there for the entire day, right?

I just feel blessed to be able to live and draw amongst these guys. It’s like a gift, and I really appreciate it. I feel that there will be many more young aspiring artists coming out of Malaysia in due time, and the culture will get stronger as time goes by. After all, it’s a small industry!

What’s next for Kael Ngu?

I’m slowly venturing out into the comic book market in the USA now, just doing blank cover commissions, which seems to be a trend in the community. I’m starting to get requests for those, so I’m hoping that I can improve my skills to attract more and more collectors! I recently discovered the comics art grading system going on with the comic book industry too. I’d be super thrilled if I could get my work graded by them as well.

Also, artists like Chris Stevens are inspiring me like crazy lately, his blank covers are so damn good! I want to get to work on more commissions for original artwork so that I can commission him one day! Looking at the bigger picture, it’d be best if I could just get to really understand inks though. That would let me do my own comics without any issues.

All images used with permission by the artist,
© Kael Ngu or respective copyright holders.

Publishing rights for this article have been synchronized with Momenta.