Quy Ho on His Humble Beginnings and Work at Riot Games 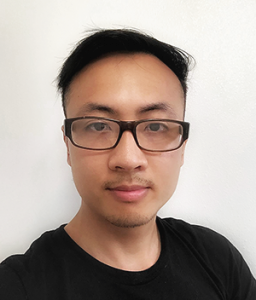 Quy Ho’s journey to becoming a concept artist wasn’t easy. Conflicting ideas and inner voices pushed this aspiration aside for a long, long time. But despite that, once he realized that nothing else is as important and that he will eventually find himself doodling in his sketchbook anyway, he came to a decision and pursued a career in entertainment art. In the beginning, he barely knew how to draw and needed to work on a few other skills like communication and being held accountable, but concept art began to show promise in due time. The process wasn’t easy and took a lot of time, but eventually, certain clients kept coming back, the tiny commissions grew to be big projects, and the door to Riot was finally open.

When Vox Groovy asked him to introduce himself, he wrote this:

I was born in a tiny town in Vietnam and moved to California at the age of nine. I always spent time drawing but was taught to stay away from pursuing an art career for the better part of my life. All that advice eventually became white noise as I found myself deeply invested in world creation. In my early 20’s, I started my career doing book and boardgame illustrations for under minimum wage, but it was some of my happiest times. I was finally being paid to draw. Half a decade later, I was lucky enough to join Riot’s world-building team.

Quy Ho’s goal has always been to be the best artist he can be, so hopefully, his creations will be seen by plenty of people in the future, starting with you. Please enjoy this exclusive interview with a uniquely dedicated creative who helped bring League of Legends’ world to life.

Please tell us a little bit about yourself, what led you to art?

I honestly always loved art but never thought of it as a viable career path. There were too many voices telling me that being an artist is a mistake, and there are much better options out there. However, to keep myself awake in school, I always ended up doodling in one of my notebooks.

It became the only thing I really enjoyed during school. College years were coming up, and I had to decide on my next steps. I pushed art out completely for a couple years, hating the thought of drawing every day. I wanted to experience “adulthood” and different studies in college, and wow, was that dreadful for me. I hated everything. I ended up back to where I was, just doodling in my sketchbooks.

I gave art one last thought and found out about entertainment design. For some reason, as an avid gamer myself, I never connected the dots that visuals for games and movies needed to be designed. I knew instantly that concept art was it. 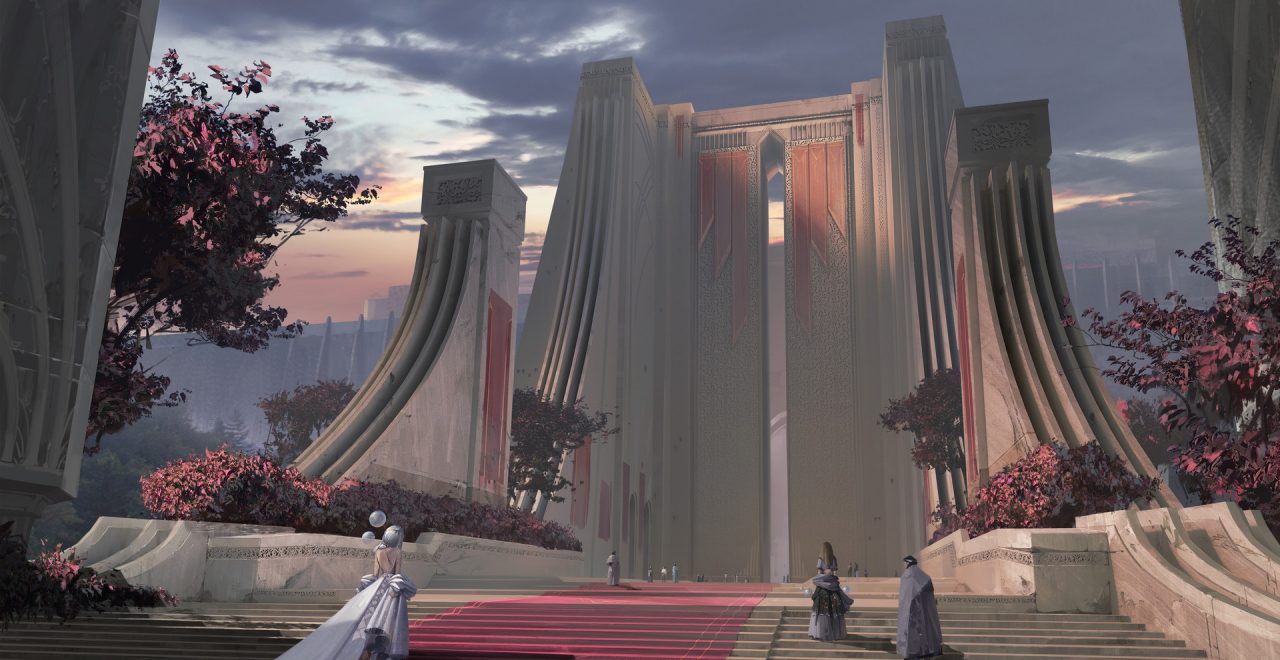 Arriving to the Citys Gate

How did you first get into the entertainment industry?

I tried to find work wherever I could at the start. I barely knew how to draw, but I thought having some sort of soft skills would help me tremendously in this industry. I needed to practice talking, negotiating and have someone hold me accountable.

I didn’t care about making money, It will come once I’m good enough and I was bad for a long time. Eventually, certain clients kept coming back and even recommended me to their friends and/or companies.

Art friends along the way would pass on projects they were too busy for, and I took on everything. The tiny commissions grew to be big projects and eventually my foot in the door with Riot. 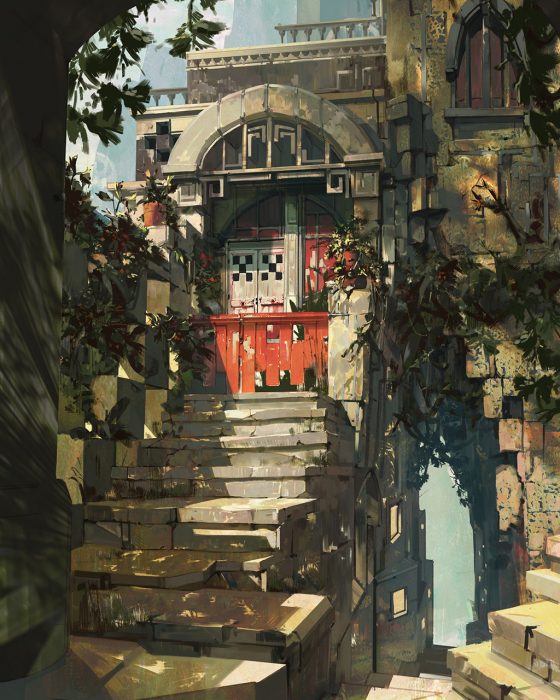 I really debated whether or not going to an art school was the route for me. I was so undisciplined that I didn’t believe I was able to study on my own. I spent the first two years at the University of California Irvine as an undeclared and saw only dead ends. The thought and cost of going back to school terrified me more than anything. It then became an easy decision to study on my own. I gathered books, tutorials and anything to keep me locked in my room. I eventually found a group of like-minded people, and we helped push each to learn every day.

I know a lot of artists who dream of working at Riot Games someday. Please tell us about your experiences being a concept artist at Riot. Did you learn a lot from the team? Were there any memorable challenges that you had to tackle?

I have to say, the imposter syndrome is still lingering. Artists at Riot are world-renowned, and being able to work with them is definitely intimidating. I’m questioning everything I know as an artist, my ABCs are all backwards, and I feel like I didn’t know anything. The simple fundamentals (as I once thought) are actually extremely complex.

I honestly can’t recall a single day or a single assignment that wasn’t challenging. And weirdly, that is kind of nice, being at Riot is opening my eyes to a lot of possibilities and challenges I never experienced. The team has created this safety net feeling that I know it is okay to fail so I can push my boundaries. It is definitely my ideal working environment, and hopefully, I can keep growing.

Where does your inspiration come from, and how do you keep yourself motivated?

Motivation is definitely not a good friend of mine. There was an interesting talk that taught me to rely on discipline instead because motivation is fleeting. Even so, without inspiration, working can get stale rather quickly. Travelling is an expensive and inconvenient way to keep myself inspired. For cheaper options, watching a movie or playing games is definitely my go-to if I am locked up. Usually, my lack of inspiration is a sign of overworking and stress, so I take breaks to recharge. 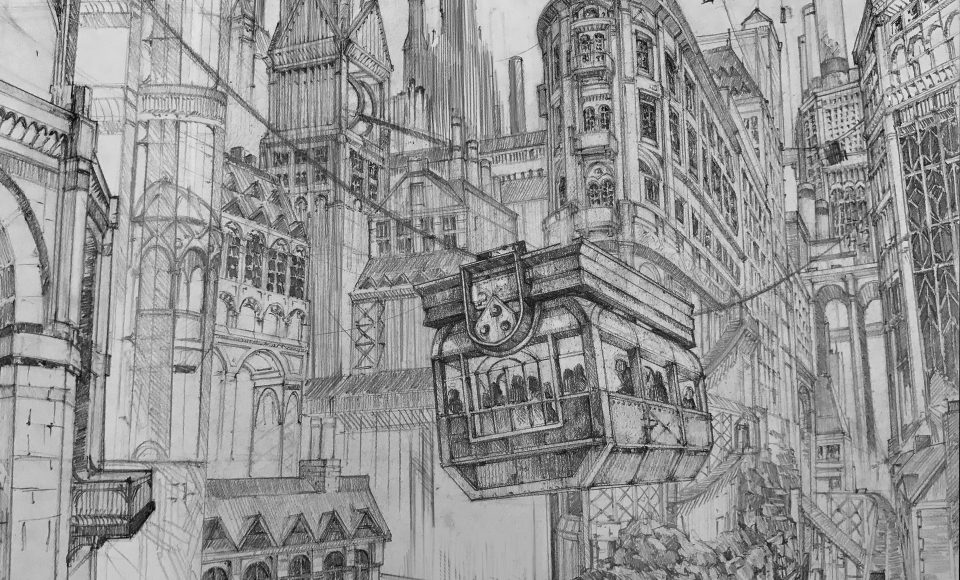 Please walk us through your current favorite work-flow from start to finish.

I love to start every project with sketches. I sketch a ton to generate ideas and get my creative juices going. Even when I am feeling braindead, it makes me feel productive. My sketches can then be cleaned up and presented to the team for feedback. Any idea sketches that are good to go would take about 10-30 hours of rendering to finish! I try my best to work organically and allow the idea to dictate my process a little bit.

If the project is more complex then I would spend more time correcting the perspective and proportions, if not then I would add color and lighting very early on. Anything and everything to keep my everyday feel a bit more spontaneous. I love to learn different ways to draw and paint therefore my process is always evolving. 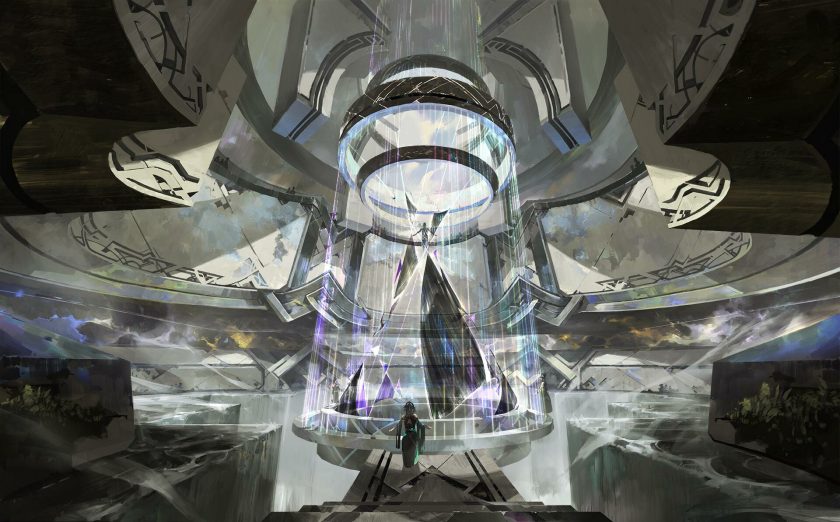 If you could go back in time to give the 16 year-old you advice, what would you say?

When I started, I always regretted how “late” I was compared to everyone else. I was only 20 and I felt like I was a decade behind. If given the opportunity, I feel inclined to tell my 16 year-old self to “quit school and start drawing now! The earlier the better, time is money!” But the truth is I would never give art a chance if that were to happen.

Art to me is definitely a journey and time spent drawing is sometimes not spent living (sadly). My earlier experiences have come in quite handy when I’m stuck on a design. So maybe, I should tell my younger self to start art even later and worry about living first, though I can definitely do both now!

We are currently experimenting with Radio Vox Groovy—our very own Internet radio. The RVG programmes include: Art Relax, VoxStream and VoxBox as of September 2020, but we will be introducing new ones in the foreseeable future.

You do a lot of impressive world-building on your ArtStation projects. Is this something that you’re looking to focus in on in the future? What’s next for Quy Ho?

Yes! Definitely! The reason I am at Riot is because of the amazing world building team and it excites me every time when my designs help add to the world. I am definitely just tip toeing into the industry and there is still so much for me to learn and experience. I am still paying my dues and putting my mileage as an artist. My goal will always be the best artist I can be, so hopefully my creations will be seen by plenty of people who can get lost in them.