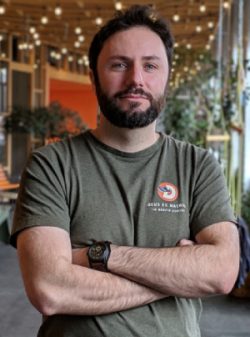 Gregory Fromenteau is an Art Director and Illustrator currently working on Tom Clancy’s Rainbow Six Siege (2015) at Ubisoft Montreal. He’s been with the company for over thirteen years now, and he’s had the opportunity to create concepts for fan favourites like Assassin’s Creed and Prince of Persia during that time. He recalls how this was back when the PS3 and Xbox 360 were both new, and the games industry was still busy with its transition into the seventh generation of consoles.

Just like today, developers from all over the world were excited about the untapped potential of new technology. Fromenteau’s personal work is a satisfying blend of fantasy, sci-fi and automotive art. When asked about his love for cars, he said that,

I’ve been a “petrol-head” since I was a kid. Drawing cars or motorcycles is an exercise I love. There are so many details, so many perfect lines and reflections…

And it’s these artworks that caught our eye first, with their lone figures standing tall next to a shiny new car in a perfectly still, cyberpunk cityscape. With years of industry experience and influences like Craig Mullins and Kim Jung Gi shining through in his work, Fromenteau’s work is a real treat.

Come and join us for a quality talk with an artist who’s spent the last decade contributing to some of gaming’s most successful franchises. You’re bound to learn something new!

I’ve loved drawing since I was very young. I took classical art classes when I was 8 years old, mainly just learning the basics. At school, I was that guy drawing on desks and any pieces of papers where I could find space. As a teenager, I had a strong interest in computers, and it was really only the beginning, but I was fascinated by the fact that people were able to create stuff in 3 dimensions. I’m talking about vintage stuff here, 3DStudio working on DOS… after that came “paint” and the early versions of Photoshop, which I experienced more on Mac. Scanning a drawing and putting colours on it digitally, experimenting with textures, etc. I think this was where it all started and where my “professional interest” began. 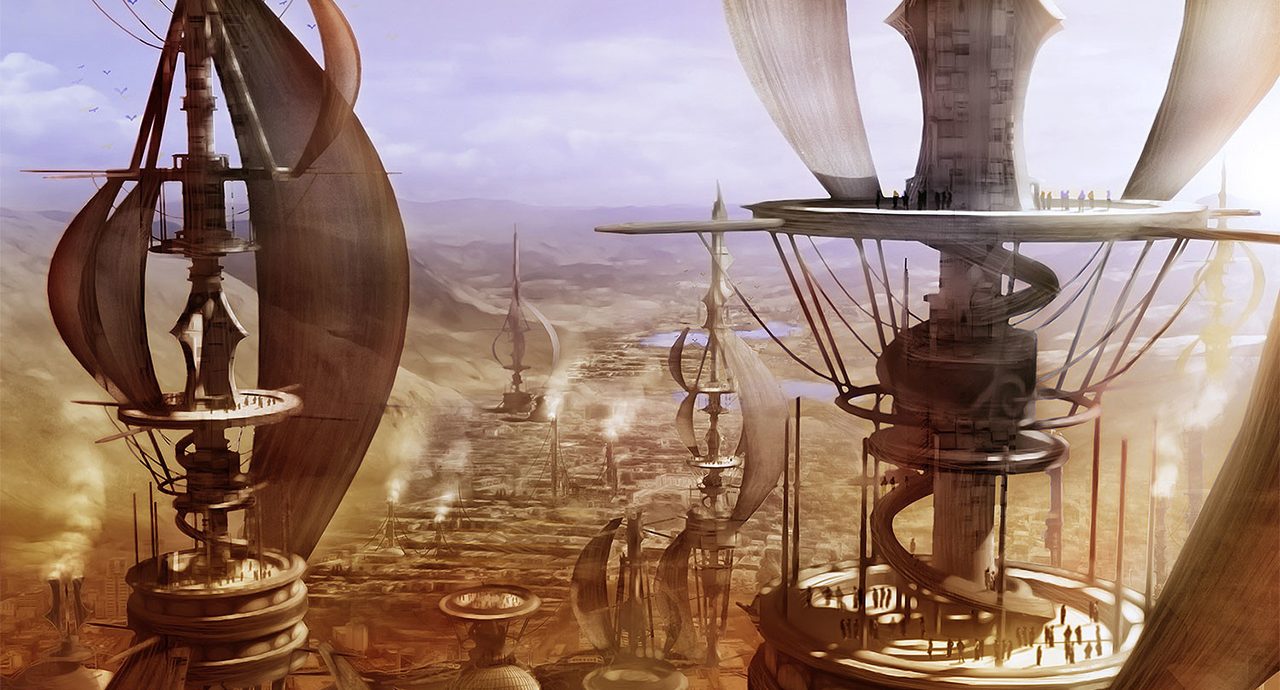 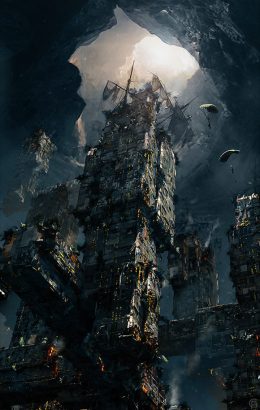 Tell us about the early stages of your art career. Were you formally trained or self-taught? What was your very first job like?

I graduated from school with a baccalaureate in Art & Literature. After that, I decided to continue in that direction, and I found a school offering a master’s degree in art with a specialisation in video games (it was back in 1999). As it was the golden era of video games and one of my hobbies, I decided to go in that direction and did the 4 years to get the masters in Visual Communication. Unfortunately, one year before graduating, the video game industry crashed in France… a lot of companies decided to move out of the country, and others simply shut down. It was bad timing to be a junior looking for a job, as many seniors were available on the market. I got an internship offer in a Studio that was doing cartoons for television.

My first job was not super interesting as I was in charge of transferring the 3ds Max assets to Softimage XSI… a bit repetitive and boring, but I manage to quickly move into the layout team. Creating the 3D cameras and animations from the storyboards. Then I did some modeling/texturing and then moved on to rendering and VFX, which I did for 2 years before leaving for Canada. My first work experience was very experimental overall. I got to grips with a lot of things, and I learned a lot.

You’ve been at Ubisoft for over a decade now! Could you talk to us about the thirteen years you’ve spent with them? What are some of the highlights?

Time flies… I really enjoyed (and still do) my work at Ubisoft. I’ve been able to explore multiple jobs on various brands in the same company. This is not always the case in this industry, and the variety in the company’s portfolio helps a lot when it comes to challenging yourself on various themes and styles. I loved working on the first PS3/Xbox 360 iteration of Prince of Persia, it was a new console generation and quite a license to work on. The art direction was great, and the team was a blast to work with! It was also something I call a “human-sized” project, meaning it had a small team working on it in the same studio. We were able to take risks with the stylisation, and I think the results were superb.

I also really enjoyed my time on the Assassin’s Creed franchise. It really challenged me to get the best quality and work with talented people. It was also the bridge to the new era of consoles (with AC Unity), and it opened new doors for very realistic rendering. It was really interesting to work with this new technology and to find recipes that could exploit these new opportunities at their best. I spent 5 years on R6 Siege. What a blast! It’s my first “live game”, and we had everything to prove and learn all at once. I learned how to make a game evolve in time and become better and better, which is quite hard artistically when there aren’t any changes in technology. 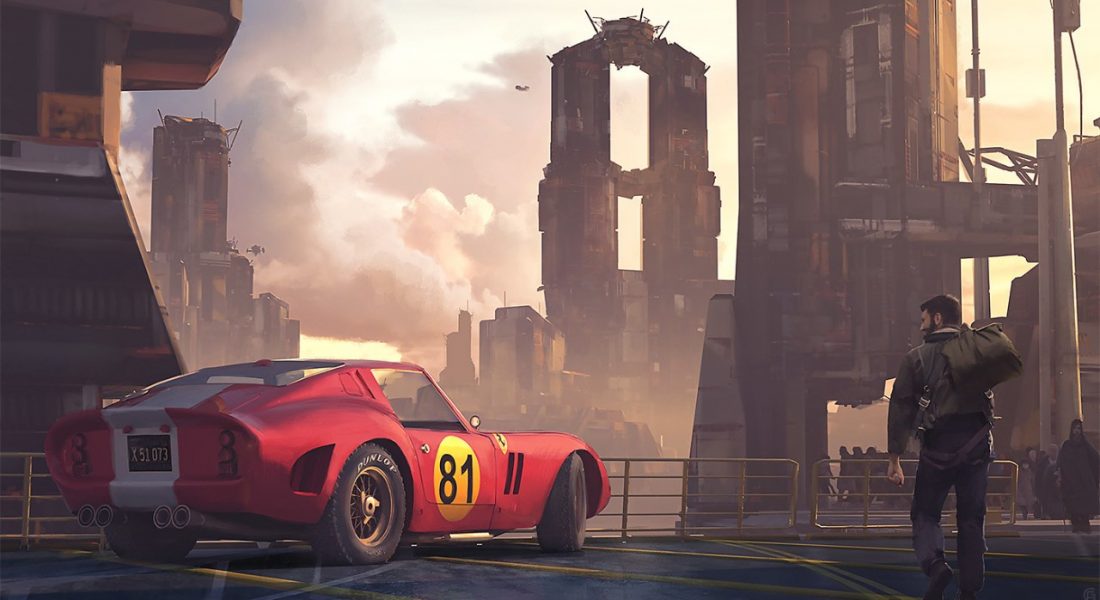 I love the recurring themes in your pieces (cars, giant animals, industrial settings, etc.)! What made you choose them?

These series are really personal. I think it’s like my own universe driven by my childhood… I’ve been a “petrol-head” since I was a kid. Drawing cars or motorcycles is an exercise I love. There are so many details, so many perfect lines and reflections… you have to make choices, but in the end, you learn a lot, and it’s fun to do. Fantasy and science-fiction are what I read most of the time, so it influences my choices. I do enjoy playing with the scale of things, creating unexpected and unrealistic sceneries.

The famous Lancia 037 in pursuit

Please walk us through some of the processes and techniques you’ve been using in your work.

I use a lot of various techniques… I don’t think I use one in particular. That’s the beauty of digital art: the possibilities are limitless.

Sometimes I use some 3D base, a classic sketch, ink, watercolour…I love the “happy accident”. With digital, you can try stuff you wouldn’t dare do on an oil painting. I think people should experiment and not be limited. The only thing that is redundant and always there is having a good mood board with references on the side. It’s good to be creative, but we learn by observing, so always store whatever inspired you and gave you ideas. It will help when you’re stuck or run out of inspiration.

We are currently experimenting with Radio Vox Groovy—our very own Internet radio. The RVG programmes include: Art Relax, Liminal Spaces and VoxStream as of May 2021, but we will be introducing new ones in the foreseeable future. 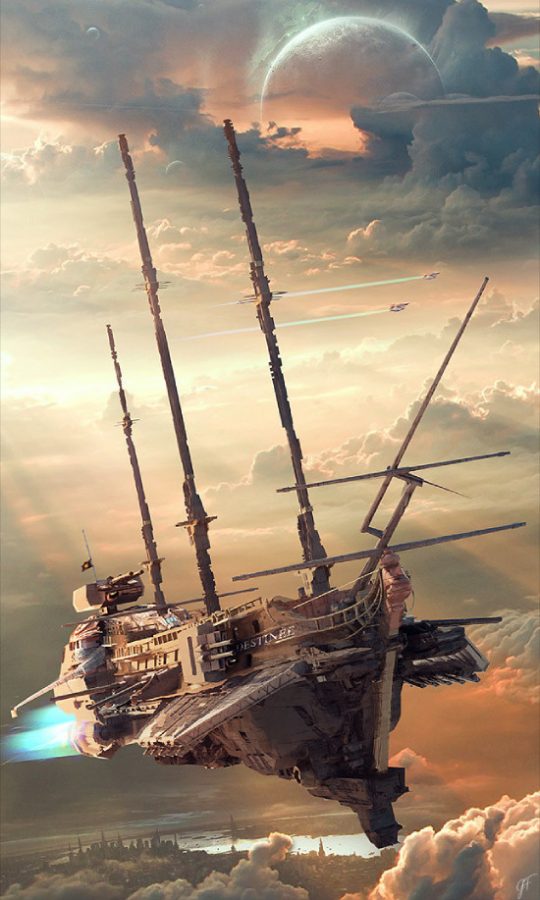 A concept artist is expected to work quickly—bringing multitudes of ideas to life in a matter of days, or, in some cases, even hours. Do you have any tips for those who are wanting to speed up their workflow?

Concept artists have many ways of creating content today. I think they should use any tools that exist to help speed up their process. Some people are even sketching in 3D using Blender now. It’s important to establish a clear difference between concept art and illustration. A piece of concept art doesn’t need to be polished and outstanding: it needs to be useful. Useful for 3D artists because they need to understand the shapes, the volumes and the materials. Aim to make good choices and ask yourself, what is the goal of the concept you’re working on. Is it for marketing? is it to showcase a mood? Is it to showcase architecture? This will help you make the right choices with technique and how much time you should spend.

Everyone in our industry has artists that they look up to, so please tell us about yours and how they influence the work that you currently do.

Craig Mullins was there when I started, and he’s staying as the “father” of digital painting for me. He was doing incredible pieces with a mouse at the very beginning.

There are a lot of artists that I follow, so It’s hard to pick one. And since around 10 years ago, there are a ton of digital artists on the market, so it’s hard to follow too. Now I tend to be inspired by classic ink drawings by artists like Karl Kopinsky and Kim Jung Gi. I think their processes are a source of motivation and creativity. They will make you want to draw! 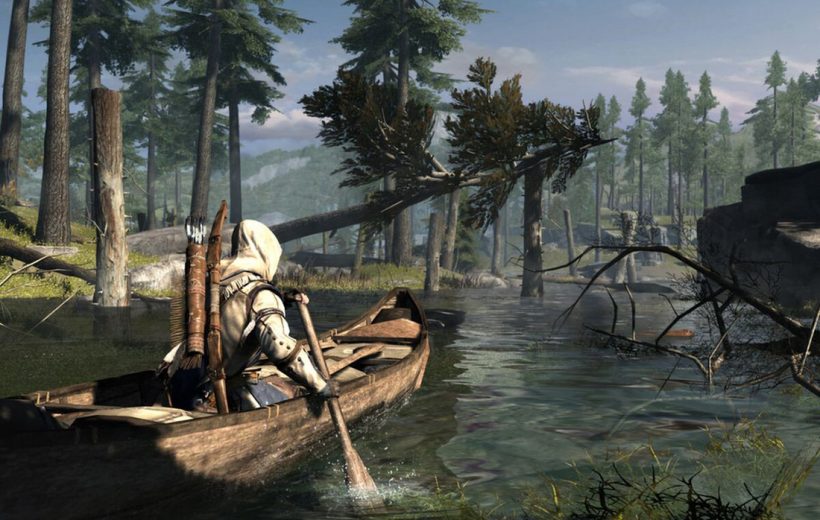 I was in charge of in-game lighting

What are your thoughts on the current state of art in the entertainment industry? Are you happy with where it seems to be heading?

I think there are a lot of artists and content. It’s incredibly hard to follow, and it can become overwhelming. A lot of them have strong skills, and it’s hard to stand out. I think what will make the difference in the future are the ideas. They are all using the same techniques and software, so the subject and the idea behind it will resonate more than the technique on its own. The industry is also at a turning point in terms of diversity. I think it’s going in a good direction, even if there’s a long road ahead…

What’s next for Gregory Fromenteau?

That’s a good question! I’m working on a very exciting project that I cannot talk about at the moment. And I have been going back to ink drawing lately, thanks to the last “Inktober” that put my work back on paper. I think I’ll continue sketching for a while and see if it ends with a personal project. I’m also curious about the future of video games. The new generations will have new expectations, we’ll have to adapt, and we’ll have to do it quickly!