Yohann Schepacz on What Goes Into Making Commercial Work

Seeing your ideas and concepts being taken, transformed and translated into an interactive experience by such skillful hands is incredible.

Yohann Schepacz is a French entertainment artist currently living in Montreal, Canada. The artist founded OXAN studio in 2012 alongside his wife, Yan Li, who Schepacz collaborated with for two years prior to setting up the company. Currently he works as an artist and studio manager there. The art studio has been able to work on a variety of different projects such as Deus Ex Universe, Magic: The Gathering and Rise of the Tomb Raider. Time after time, Schepacz has been able to provide excellent works for commercial clients. Today, he is here to talk to us about his journey so far.

I’ve been working as a concept artist and illustrator for over ten years now. I started out as a graphic designer in Toulouse, in the South of France. I was working all sorts of crappy low paid jobs at the time. I studied computer graphics at ETPA (Ecole de photo et Game Design) for two years. Once I was done with that, I moved to Réunion (a small island in the Indian Ocean, right next to Mauritius) and illustrated children’s books for three years.

After that I managed to land a scholarship and studied graphic design at the Billy Blue Design School in Sydney, Australia. I met Adam Paquette during this time and he introduced me to the local film and games industry and helped me get my first gig in concept art. We became great friends and moved to a house with another great artist, Eddy Taylor. We set up this crazy-cool house where we all learned about our craft, it was awesome!

Eventually, my visa ran out. I put some work online and got lucky. I received a job offer three days later and landed my first in-house position at Gameloft in Shanghai. I worked as a concept artist and stayed for a year before the studio was moved to Singapore. I chose to stay there for another year and then moved back to Europe where I worked as freelancer. This is when I founded OXAN studio alongside my wife. I was approached by Eidos Montréal to work on an amazing project shortly after. I couldn’t say no, it was a dream come true and there is also the fact that I’ve always wanted to live in Montreal.

I’ve been here for three years now, working on a variety of projects such as Rise of the Tomb Raider and Deus Ex: Mankind Divided. I couldn’t be any happier.

How did you know that you wanted to become a concept artist?

Well, I didn’t. It happened because I met the right people at the right times. Looking back at it now, drawing and painting were the only two acceptable reasons to stay behind a desk all day. If I failed, I would’ve liked to become a mountain guide or a martial artist (all in all, something that involved physical activity or at least going outside often). 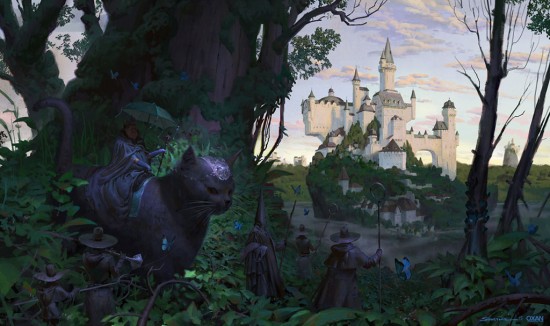 You work as the studio manager at OXAN, what’s that been like?

The management is a minor part of it. I mostly work on concept art and illustration and manage as need-be. The team is made up of two people so it’s quite easy to manage the employees. The most interesting part is the branding and the building of the portfolio which is a constant work in progress. I think that being business savvy is important for an artist. I’ve made all of the mistakes you can possibly make but that’s how you learn. Honestly, it’s a fun game to play. And looking at our current achievements and ongoing projects, I’d say we’re doing alright.

What was the most exciting project you have worked on as a concept artist and why?

It was the one I talked about earlier, it got cancelled though. It was cancelled after a year but it was the most exciting art direction and game design I’ve ever seen. It was a real concept art job where you had to think about design and often found yourself failing, a lot of things had to be invented from scratch. There were so many uncharted territories to explore and we had no references or similar project to take ideas from. There are very few projects like this one nowadays. As far as I know, the vast majority of today’s games are based around things that already happened and or exist, making the job seem more like illustration as opposed to a concept art one. That being said, I’m currently working on a project in the Deus Ex series and the art direction calls for a ton of brainstorming to retain everything that was laid down in the reboot (Deus Ex: Human Revolution). I feel that I’m very lucky to be able to work on this project.

Describe the steps you took when you worked on the cover art for the new Deus Ex Universe comic series.

It started off with it being an interesting team effort. Basically, everybody in the concept art team pitched ideas for covers for around two weeks. This was actually really fun and fruitful. We ended up with so many new and fresh ways of illustrating the world that even the marketing department took all of our unused ideas for future advertising campaigns. I submitted around ten thumbnails, two of them got selected by the directors as the first and last covers for the series. Twelve covers got done including alternates. Everybody in the team got a chance to illustrate their vision. The opportunity to do illustration work doesn’t arrive often so it was great to see everybody having a go at a polished story-driven artwork for once.

After the ideation phase, I simply painted the picture. I posed a 3-D model of Adam Jensen that the team provided. The main protagonist is locked down so that’s pretty important. Everything has to be exactly right according to the canon. I think that painting all of it would be a pain and ultimately not very interesting. That being said, I ended up repainting Jensen almost completely because a 3-D model feels so lifeless and wooden. It completely misses the organic flow of a living person. However, it is a very useful base to start off with. Apart from that, it was just regular painting, with all the sweat and tears that go with it. I think the whole process took me forty or fifty hours over the course of one week.

Once the characters were done, i had fun experimenting with secondary storytelling and color grading, it was an ongoing discussion with our amazing art director. 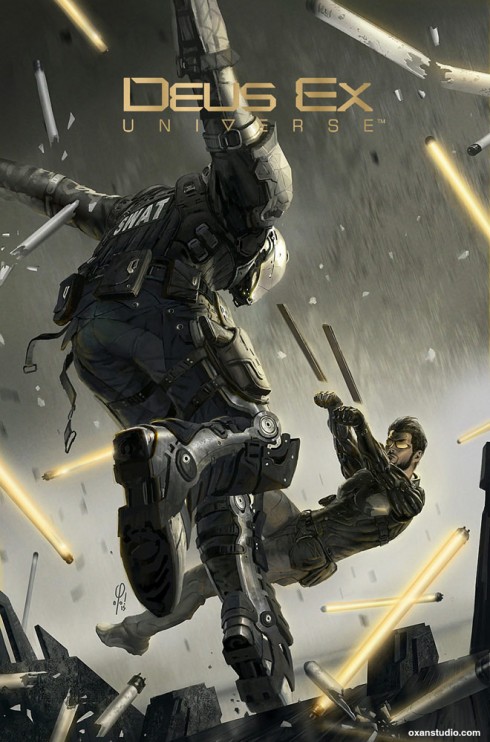 Cover art for the first issue of Deus Ex Universe

Tell us a little bit about your work on Rise of the Tomb Raider.

I worked on this game for a year, I jumped in on it at the start of co-production. It was very intense. I was the only concept artist in the entire Montreal team. It was a huge challenge but an amazing opportunity to get first hand experience with the many aspects of a video game production. I learned a lot. Especially about the many many ways a concept artist can help a team during production. I feel that I’m very fortunate and grateful for this position and for the team I had a chance to work with. It was such a humbling experience to be a cog in such a big machine. Seeing your ideas and concepts being taken, transformed and translated into an interactive experience by such skillful hands is incredible. 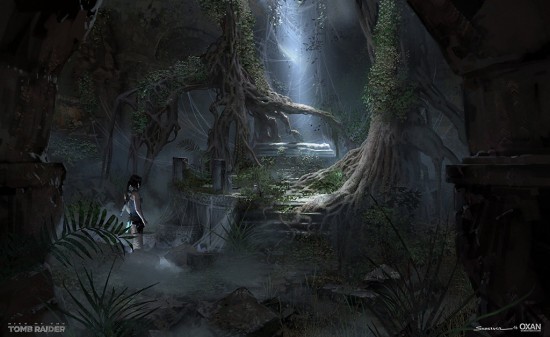 Crypts: concept art done for Rise of the Tomb Raider 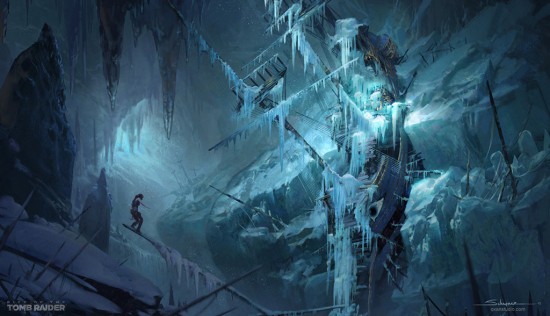 What advice would you give to an aspiring concept artist?

I guess I’d give the usual advice. Firstly, you need to master the fundamentals as soon as possible. It may take a lifetime but there is still a given level that you can reach in three to five years and that will easily make you a great asset for any company. In the meantime, don’t forget to experience life in every way possible and as often as you can. It’s important to learn something new and interesting everyday. And to challenge habits and your way of thinking. Try to travel to new places, meet new people and so on. Read a lot of books too because  that is where your good ideas will stem from. There are so many clever people with awesome ideas that they wrote about in almost every genre. Every book is waiting for you to pick it up and illustrate it. The technique is important, of course, and it requires a tremendous amount of hard work, obsessiveness and relentless dedication to acquire and maintain. On the other hand, ideas are way more important and are at the core of what it means to be a good concept artist. There is a tremendous amount of hard work if you want to maintain the skills and the mindset that you need for this job.

What’s next for Yohann Schepacz?

I’ve been working within the universe of Deus Ex since last summer. Its art direction is a great change from Tomb Raider. I have had the opportunity to design a whole lot of characters as well as environments so I’m hoping to stick around for a while. This one is a lot more design-oriented and that makes it quite challenging for me. I love it! Other than that, I hope to find the time to develop my personal project, TINKIET. Maybe I will setup a Patreon or a Kickstarter to help me realize my plans for its development. Recently, I have been trying to share my process by creating tutorial videos and uploading them to my Gumroad, these should help aspiring artists to get where they want to be.

All images used with permission by the artist.
© Yohann Schepacz or their respective copyright holder.