Edouard Caplain on the Art Behind Life Is Strange 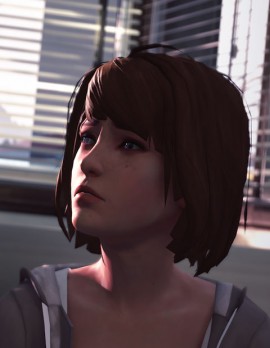 …I believe that if you paint what you like for a while you will end up with something that is your own and is unique at some point. There’s no rush.

Edouard Caplain is an entertainment artist from Paris, France. He has worked on Life Is Strange from start to finish and also provided artworks for several other titles such as Alien: Isolation in the past. Caplain has been involved in the visual development of the studio’s second game for three years, as one of the main concept artists at DONTNOD Entertainment, he influenced the aesthetics of the game greatly. The following is an interview with Caplain where we talk about the art behind Life Is Strange; find out what what went into making the seaside town of Arcadia Bay, the processes that were used by the artists and how the unique art direction was achieved.

It all started eight years ago, when I graduated and landed my first job as a concept artist at Frontier Developments in the United Kingdom. I was really lucky because I had a terrible portfolio at the time, but they believed I could make it. I learned everything about what it’s like to do this job there. What I was meant to do, how to do it and how to be effective and efficient. The game we were working on was called The Outsider, the team was great but sadly, it got canned before release.

I moved to London afterward to work on WarDevil: Unleash the Beast Within at Digi-Guys for a little bit before going off to join the Creative Assembly to work on Alien: Isolation, another kick ass project I am proud to have been a part of.

Fast-forward two years, and I get the opportunity to move back to Paris, France and work at Dontnod Entertainment.

What motivates you to create art?

I’ve always liked drawing because it’s always been fun. If my drawings were liked by others then that would have been the cherry on top. However, the motivations behind it were quite selfish at first. It took me a while to start working on my craft, to get better and to make it for something bigger.

Nowadays, I’m still happy painting my own stuff. On the other hand, working in a team and having the opportunity to share your work with other artists every day as well as seeing how excited the 3-D team gets when you get something right is all very fulfilling.

I can’t say that I have a personal style. I have seen the works of many talented people and I tend to take bits and pieces in their work that I like and then integrate those into my own works. A lot of young aspiring artists are in a hurry to find their own personal styles. I believe that if you paint what you like for a while you will end up with something that is your own and is unique at some point. There’s no rush.

How was it working on Life Is Strange alongside the team at DONTNOD Entertainment?

Life Is Strange is the first game I worked on from start to finish. It was three years’ worth of work in the end. During the first year of development, it wasn’t the main project at DONTNOD Entertainment so we only had a small team of around fifteen people working on the prototype. With this many people in the team, it was organic and we were very close. There was a lot of input from everyone and as an artist, you could try things out easily and get feedback straight away. It was great!

Of course, we couldn’t make the game with fifteen people. Once we signed with Square Enix, the team grew to full production size. For me, it was all about producing the character and environment concept art quick enough to feed the 3-D artists at this point in time.

The final year was the hardest. There was an episode released every two months and I can safely say that it was intense! There was much less concept art to be done, but there was a whole lot of digital 2D artwork to do. Life Is Strange is a story-driven game so a lot of thought went into the in-game posters, magazines, letters, computer screens and so on.

Luckily, we had an amazing response from the players and that helped to keep the quality as high as possible.

Walk us through the processes you undertook in order to create your favorite piece for the game.

I especially like the Blackwell academy artwork I did, that was one of the few images I took the time to polish. Most of my images have a very similar process. Most of the information comes from the script; the school was founded in 1910 and built atop a hill, dominating the town that’s further down. I had a block mesh made in Unreal Engine from the level designer so that I could get the sizing of it right.

I started off by researching what schools looked like at that time. Their architecture, the materials that were used to build them and also things like what kinds of trees populated their campus. It’s important to have the right references to work from when you’re trying to make something look real.

When I am good to go I startup Photoshop. I block in some colors using very few layers and flattening often. I am only focusing on the bigger shapes and lighting at this point. Once I am happy with the overall image, I get into the detailing and polish it.

Talk us through how you and the team created the town of Arcadia Bay.

We tried our best to make sure that the game is as close to reality as possible. We searched the Internet to see what cities in Oregon looked like to figure out (in overview) what Arcadia Bay would look like. We knew that it’s a small town on the coastline of Oregon, and we know it’s main points of interest are the school, the diner and Chloe’s house. The main reference for the city was Astoria, a city on the hillside, but it was way too big. After that we found Garibaldi, a much smaller town which was working well with it’s main street being along the coast (well… almost).

Google street view helped a whole lot since we couldn’t afford to go there. I took a ton of screenshots and based the concept art around them. If you look it up, you’ll see that it’s main street is pretty close to the one we have in-game.

The other locations (the school, diner, junkyard and even the lighthouse) are taken from various locations from around the United States. There were ample photo references to base it all off of. Typical concept art work. 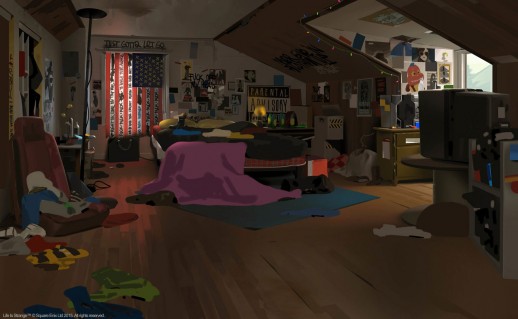 How did you guys develop the art direction overtime?

The art director had a good idea of how he wanted the whole game looking from the very beginning. He liked what I was doing with my personal works (he also liked what a couple of other brilliant artists were doing, but lucky for me, he didn’t ask them). Instead, he told me to do the same for the Life Is Strange concept art. I think that the hardest part was to translate that painterly look into 3-D. We had a lot of back and forth with the artists, “How will we stylize the textures?,“ etc. It wasn’t easy but they did a fantastic job in the end.

What’s next for Edouard Caplain?

Oh, Well… I am about to become a father so I am guessing there are lots and lots of nappies ahead.

All images used with permission by the artist.
© Edouard Caplain or their respective copyright holder.