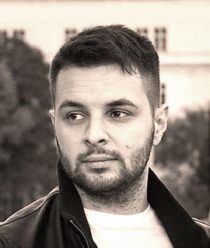 …I’ve always believed that the reason I am alive is
to create something beautiful.

Darek Zabrocki is a Polish freelance concept artist and illustrator living in Gdańsk, Poland. Over the past few years, he’s worked for a good deal of reputable companies such as Blur Studio, Framestore, and Ubisoft. Zabrocki made the transition from hobbyist to professional in 2007, when he decided to try working in the digital medium. As an artist, he continues to explore different software and processes, and that helps him create a diverse portfolio – allowing him to showcase a wide range of skills and abilities. Time after time, he’s shown us that he’s an artist who’s willing to step into the unknown, even after he’s perfected a personal style.

Back when I was a child, my favorite movie was Lion King. After having seen the movie, I felt that I had to draw some of the things I’ve seen in it, and I started drawing everyday for long hours. I did my best to draw and or paint something different each time, but always found myself coming back to animals. Fast forward a decade, and I must’ve had thousands of drawings all around me.

It’s amazing to think about the support I got from my family, especially my parents. They made sure that I always had everything I needed, and they were always there for me. It’s hard to believe that when I was in high school, I was burned out – didn’t want to make art anymore. I carefully considered my options. For a while, I even thought about getting started in electronics. Fortunately, my mother caught onto this, and she helped me get back on track by talking to me about it and making a few suggestions. She came up with all sorts of inspiring subjects that would ultimately lead me full circle back to my love of art. Amazing how it works even today! With that in mind, I hope I don’t do that again. I’ve always believed that the reason I am alive is to create something beautiful.

Many years later, I found the works of many renowned computer artists. I couldn’t believe what I was seeing when I first looked at the works by the likes of Marek Okon. So many artists were working in the digital medium – using hardware and software I’ve never even heard of – with their Adobe Photoshop and graphics tablets. So, I said to myself “Hey, I wanna try that.” I began learning the basics. After a couple of months of experimenting with different software and processes, I left the traditional medium behind and moved onto the digital one. Nevertheless, I made an effort to learn the basics of any new technique in the traditional medium before moving on, because it was always easier for me to do so.

What motivated you to create art?

I think that there was always a strong intention to put ideas on paper. I don’t know where it comes from, but as I am an emotional person, every time I saw or heard something that moved me, I had to translate those feelings into art. 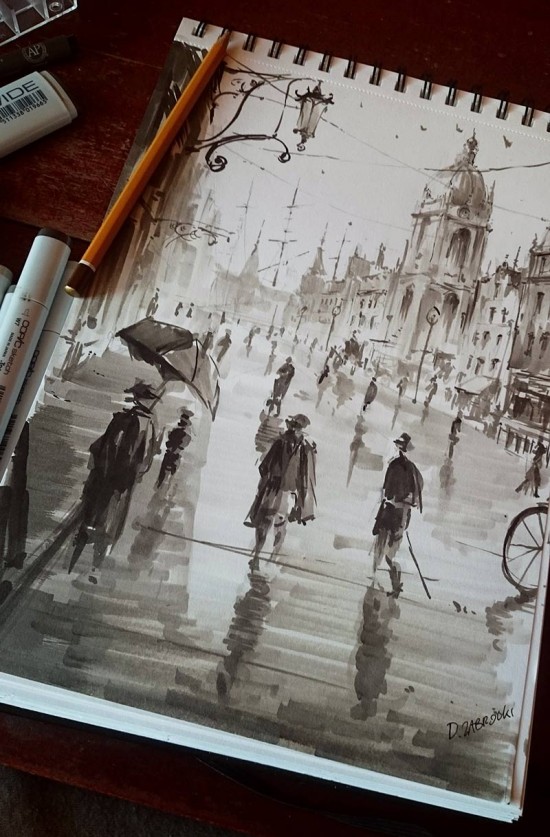 City sketch – Some Victorian alike sketching, mostly
markers and a bit of pencil as base line.

You will find that my inspiration comes from many sources. Among other things, Observing nature gets my imagination working. Like everyone else, I like movies and music respectively. Interestingly, my dreams are one of my inspirations too. Time and again, I would dream about a world so astounding that it would leave me wanting to flesh it out.

More often that not, I’ll be messing around with different subjects. I’ve never had problems with trying new things, so I’ve always felt quite confident when doing something new. Whether it’s fantasy or science fiction, I’m always up for a challenge. The greater the challenge, the more exciting it becomes.

I consider myself a self-taught artist. Having studied at the Academy of Fine Arts in Gdańsk, I learned next to nothing. I guess the one good thing was that I had the chance to meet like minded people that I stay in touch with even now. I wouldn’t say that the school was bad, I’d rather you know that it’s because I didn’t go there often. Every now and then I’d go to make sure that I pass the exams- written ones, of course. I feel that I was lucky as there were a few professors that helped me by letting me do things my way. I am grateful to them because they didn’t try to change me.

I’ve spent the last few years discovering artistic influences. As I mentioned earlier, it can be anything from movies to music. Sometimes, I’d look over the works by the old masters – the works of Sargent and Sorolla are ones I favor the most. As well as that, I love the art of the Dutch painters. For sure, there’s also a lot of great artists now, Craig Mullins is one I admire. Let’s not forget that there is always inspiration around you, you’ve just got to pay attention to it. Let your imagination run free. 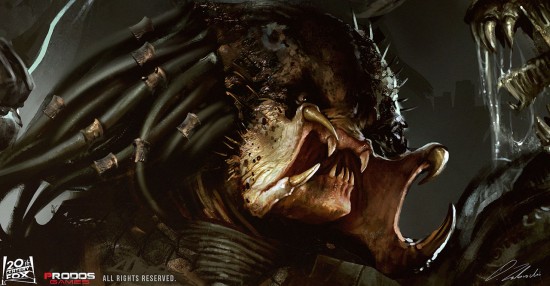 Predator – Close up on Predator’s face

Do you think that attending art school is a must?

I think that there’s no need to study art at a school. It is important to note that art school is not going to make you a great artist, you’ve got to do it on your own. 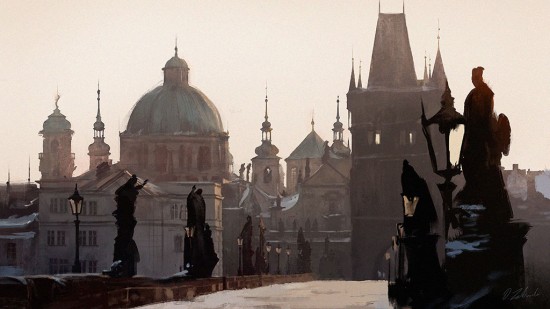 In the past, I drew on paper, and painted on canvas or paint boards. Nowadays, I find that I am almost always working on the computer using my old Wacom Intuos to paint digitally on Photoshop. I use a range of software including: 3ds Max, KeyShot, and I am learning Zbrush as well to better my commercial work. An artist needs to keep up with the newest hardware and software because of how competitive this industry can be. Sometimes you have to create a base for your scene. Let’s say you’ve came up with a nice castle that you sketched out in Photoshop, you’ve got it all down pat. You’re just about done, when out of the blue, your client tells you to change the composition. Having this scene in a software like 3ds Max would help you a great deal as it’d let you change it around at ease. So, outside of working with that software, I am still quite an old-school concept artist.

New ways of working are continuously being introduced, what do you do in order to keep up?

I do my best to keep up with new software, and also new techniques whenever I can. Even though overdoing it isn’t the best idea, learning here and there won’t do you any harm. Once I get good at something, all’s I’ve got to do is publish it online for everyone to see so that they know what they can expect of me. Every once in a while, I see artists introducing a new workflow and then showing their new skills. This can slow them down. It’s true that having a wide array of skills can be of use, but it’s better to stick to what you find comfortable and or what’s most efficient for the clients. I am sure that it’s better than being trendy.

You’ve involved yourself in the community a lot, how has that affected you?

In all honesty, not a great deal. I’m still the same person who likes to talk to others, give feedback, and even help others make the right decisions. The problem is that I have little time to hangout on social networking sites like I used to. Back in the day, I would do quick sketches for different groups on Facebook. I’m Absolutely certain that that’s helped me find a following, but I don’t really do it anymore. The focus is on other things like my work, and Level Up!, an educational program I’ve put together with my friends. I put a lot of time into bettering that program together with those involved in it.

Atop that, I upload my artworks to a few social networking sites where people can check them out. I use ArtStation, deviantART and a few others. Once that has been done, I get to work again. Self promotion is something many artists prioritize, failing to grasp how much time It can take, and what it can consequent in.

What are you hoping to achieve in future?

I hope to realize a bigger project someday. I’m unsure whether it’ll be a shot film or an animation. All in all, I just want to come up with something that’s all mine. Having been given the opportunity to work on feature films and AAA games was satisfying, but I was bringing their thoughts and ideas to life, not my own.

All images used with permission by the artists;
© Darek Zabrocki or their respective copyright holder;