All the great moments in the game are unified and polished 100 times by different people, and there is no scene or shot in-game that was 100% done by one person alone[…]

Vadim Shchepilov was born and raised in Ukraine, which is where he’d spend most of his youth dreaming about becoming a graphic designer while working his day job. Once he learned to use Photoshop, he realized that this kind of software could be used for personal art as well, and like many others, he dived right in.

After a couple of years’ worth of practice, Vadim became a skilful generalist, mainly because he already tried his hand at everything digital art had to offer back when he was still learning. Things like CAD, illustration and MEL scripting were all familiar to him. And if any of you remember our previous interviews with the artists behind Ori and the Blind Forest (2015), you’ll know that Moon Studios’ workflow is built on having everyone contributing to a variety of different things. That made generalists like Vadim an excellent fit for their new game—Ori and the Will of the Wisps (2020). In the interview, he told us that, “Ori is the first project that I got involved with and didn’t feel ashamed of the final product after.” So it’s not just a historic moment for the hundreds of thousands of Ori fans, but also a big stepping stone in Vadim’s career.

Now, after five years, our favourite platformer is finally back on the front page of Steam. We couldn’t be happier, and It’s all thanks to artists like Vadim Shchepilov and his wife, Lina Kit, who were there to bring the forest of Nibel back to life for all our sakes. If you’re a fan of artists’ accounts of the games industry, Ori, or just really like Vadim’s personal artwork, we couldn’t recommend reading this interview enough!

In 2008, I was still working a day job while dreaming about becoming a graphic designer. I started to learn to use programs like Photoshop and Illustrator, just because it was all “must-have knowledge” for that particular job. Then I quickly understood that I can use these same programs for my personal art outside of work. So I dived deep into CG forums, seeing that there are lots of possibilities in digital art—not only drawing but also 3D modeling, sculpting and animating. I tried to learn everything I could find, even CAD and MEL scripting! I just didn’t know which of these would be useful to me, and the other ways were kind of boring. Maybe that’s why I like being a generalist… It fits Moon Studios quite nicely, as this studio actually uses a workflow where people do a lot of different things instead of concentrating on something specific.

We are currently experimenting with Radio Vox Groovy—our very own Internet radio. The RVG programmes include: Art Relax, VoxStream and VoxBox as of April 2020, but we will be introducing new ones in the foreseeable future. 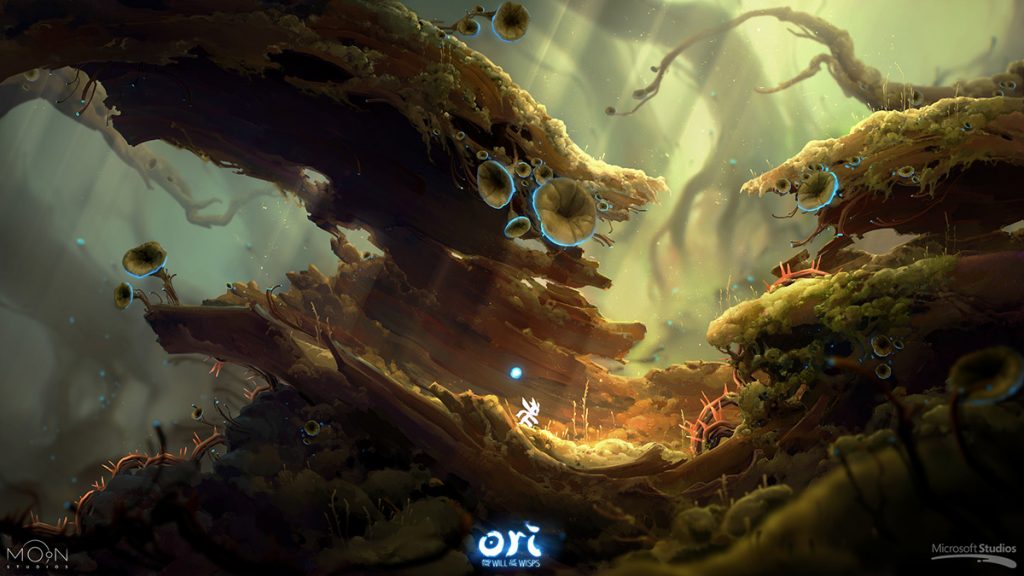 Alright, tell us a little bit about your work on the game itself then… what were you in charge of and how did you go about making it?

Just like everyone else in the studio, I had a variety of different tasks. Think something along the lines of painting light masks for each asset, fixing bugs, dressing scenes and even playtesting. But most of the time, I was working on concepts and painting assets for the game – some by myself, others in cooperation with other artists. I wasn’t in charge of anything specific. Even in the Mouldwood Depths area (I spent a lot of time on it), I tried to add a little bit of orange colour between the grey fungi. I thought that this will add some contrast… something warm in the cold darkness. Even though Mouldwood Depths is an area that was supposed to look creepy, I still tried to make it feel a bit calmer and more comfortable for the players. And while I don’t know how much it changed the direction for the final look, for me everything looks like a giant collective product. All the great moments in the game are unified and polished 100 times by different people, and there is no scene or shot in-game that was 100% done by one person alone.

Walk us through your guys’ thought process when it came to building something from the old Ori… how did the art team take what was already there and progress that to the next level, what kinds of decisions were you making at the start?

I joined the team towards the beginning of the production phase, so I can’t tell you much about what happened at the start of development. Still, we always had a direction – “Let’s make everything bigger and better”. We referenced the first game a lot, especially when we had final scenes in the middle part of the production. We had situations on art calls when people felt that, “it’s too much, let’s make it more readable, like the first Ori”. The first game is more minimalistic, there are a lot of places where the main trick was to show both background and foreground art with simplistic silhouettes. In the second game, that’s not enough, and we always tried to add rim lights and light rays everywhere. When I reworked assets from the first Ori, the main thing was to add deep shadows and stronger light. Every asset should feel like three-dimensional and must pop more. 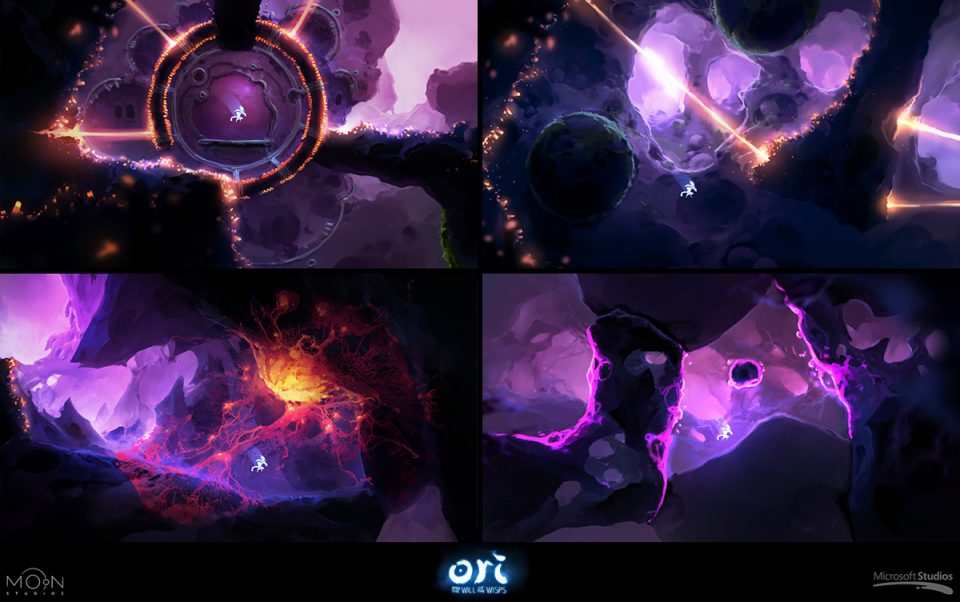 Cool! Tell us about that then… From your POV as an artist, what’s it like to work on a project remotely as opposed to working in-house at a studio?

For me, remote work is neither good nor bad, its just different. It has advantages like a flexible schedule – you can do your job at night if you need daytime hours. Still, on the other hand, you always have access to your workplace, meaning you always can do something useful for the project. So the resting hours are not so rigged like in the office. I had some experience as a freelancer before. It was a long time ago, and it was hell. I didn’t have a constant flow of tasks. I had times when I was doing nothing and searching for projects, or I had an overflow with the requests and was working on many tasks at the same time. Working on small quick projects was not so bright as I imagined back then. And now I am working remotely again, but this is an entirely different workflow. I have teammates and a big project, I always know what I can do, and I feel comfortable about it.

What was the biggest challenge you had to overcome when working on Ori, and how did you do it?

For me, the most challenging part of work was the technical aspect of the development. I used to get “technical art” bugs just like everyone else, and the situation where I didn’t know how to solve these problems was quite common. I had to find a colleague who knew the possible fix for the issue and who could show me how to solve it so that I could fix it myself without any help next time. You have to know for sure what you are doing, and you must always test your work, making sure that you’re not breaking anything with your fix. It’s essential. It may seem easy at first glance, but in game development, you have to do a lot more than just draw beautiful images. 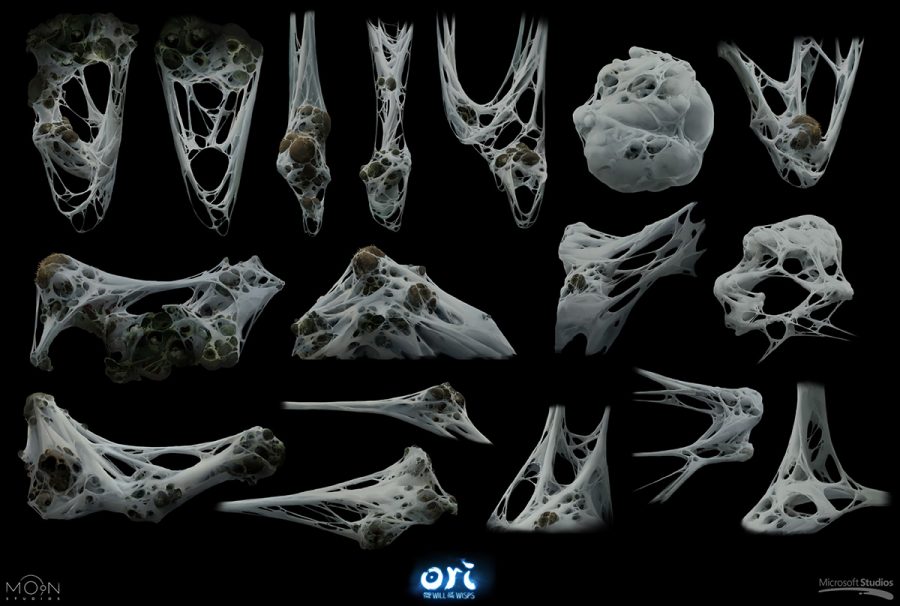 Let’s move away from Ori for a bit, I’d love to know more about you and what you’re looking to do now that this game is behind you. Do you have any personal projects you wanna talk about, or maybe some aspirations for the future?

I didn’t paint for myself for two years. Sometimes, I feel sad about it, but I tried to think about why this is happening. Since 2009, my motivation was looking for an exciting job where I could be useful, and the product itself would be loved by both developers and players. I did a lot of different things during those years. I’m thirty-three years old now, and Ori is the first project that I got involved in and didn’t feel ashamed of the final product after. This journey of painting after my full-time job is starting to make sense to me. For the first time, I travelled beyond the borders outside of my home town of Kharkiv when I was 25. Less than two years ago, my wife taught me how to ride a bicycle, and this is like a new universe for me. I just want to live a normal life instead of making my own game after the full day of development at the studio.

Could you walk us through some of the processes and techniques your team used? Let’s say one of our readers wanted to try and emulate Moon’s workflow, what would they have to do?

At Moon Studios, the most useful skill I tried to improve on is reusing assets effectively. All of the levels are made up of a limited amount of small assets, and by changing their placement and size, you can have countless combinations of the bigger shapes. The same thing with painting—you can reuse small polished parts on the draft piece. This is an excellent way to produce assets faster without losing quality. And don’t worry about the repetitiveness of patterns, even if it is visible—it’s effortless to fix it later on. Also, another technique I’m using is to sketch your idea with colour and light as soon as possible. It becomes your anchor point. You can change anything, but you will see how everything works together without having to worry about long-term pipelines. 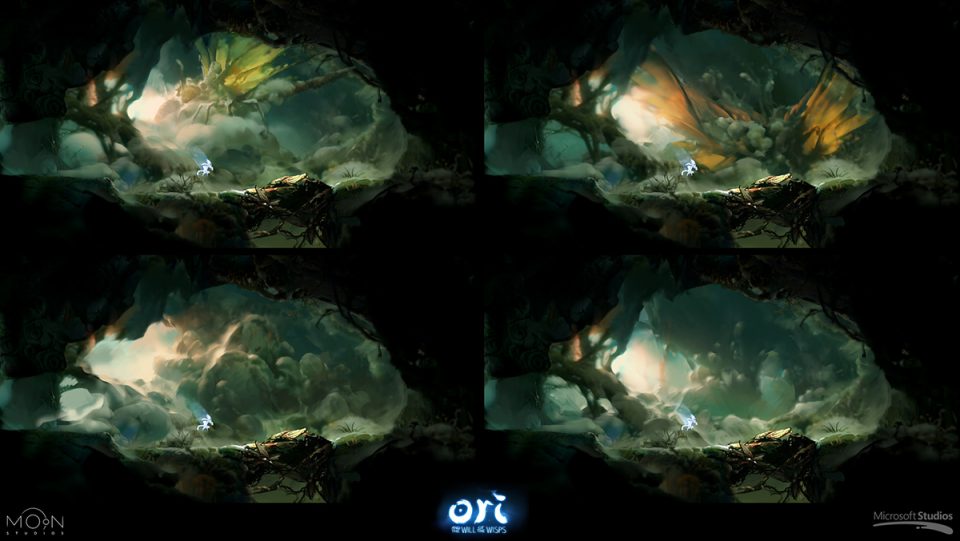 Can you tell us about the collaboration between the art department and the programmers?

Artists and programmers were always like two separate islands far away from one another. As there were no pipelines which could involve artists and programmers together for some time, our relationships were almost always situational and based on some specific problem we were trying to solve. We (artists and programmers) just have entirely different mindsets, and at Moon, we have two magicians—tech-minded artists Daniel van Leeuwen and Oleg Shekhovtsov—who tackled the tech side of the art. Other than that, programmers are making tools for us, and we have straight conversations with them about usability. That is the primary interaction between our two departments.

And for the final question, we’d really like to ask you to tell us a thing or two about your taste in music!

My tastes were rooted in heavy music like Otep, Slipknot and Tool. When I was learning to play on drums, I started to listen to a lot of fusion music like Cosmosquad, Niacin, Passport, Electric outlet and some Prog rock music – King Crimson, Djam Karet, Riverside, Beardfish. After the fusion, I discovered jazz music for myself – Esbjorn Svensson Trio, Nik Bartsch’s Ronin, Hiromi Uehara. Right now, my favourite genres are progressive rock\metal, minimal jazz, blues rock and stoner rock. The most relevant releases that I have on repeat right now is Ambrotype – The Revelations, Seven Impale – City Of The Sun, Rival Sons – Feral Roots, Батюшка – Панихида.