My main aim was to
simplify my designs
so that anyone
could understand
them.

This isn’t the first Vox Groovy interview to feature someone who has worked on Duelyst (2016), but Anton Fadeev is the artist who made the game’s art style pop. His bold colour palette and stupendous environments have been around since the start of its Kickstarter campaign on March 9, 2014. Of course, those of you who continue to follow the game’s development know that the majority of its marketing art was made by him too. We spoke to Anton recently, and we were able to learn more about how he got his first credit (Duelyst) through Keith Lee—an ex-Blizzard developer who showed Anton that his artwork might be worth more than initially thought. He also said that he was given almost complete creative freedom, which is something he details in the latter half of this interview.

When asked, Anton attributed the famous colour palettes’ success to his past as a designer. He said that, “My main aim was to simplify my designs so that anyone could understand them.” And you can definitely see that as soon as you look through his ArtStation portfolio. It’s very rare to find an environment artist who stands out this much, and I would argue that his art is one of Duelyst’s unique selling points. In fact, that is why me and my friends first downloaded the game! If you, too, want to learn more about this unique concept artist and his personal journey, read this exclusive interview. Maybe you’ll want to try something new (?) yourself one of these days.

Please tell us about yourself. What sparked your interest in digital art?

I’ve loved drawing since I was a child, and I’ve always liked video-games, so I dreamt of becoming a concept artist for games. This is a long-term goal for me. I guess you could say that digital art is the most convenient way for me to achieve my goal, so my dream is ultimately what led me to pursue a career as a digital artist.

What inspires you to create more art? Who do you look up to and why?

I am inspired by individual ideas in films and games. Especially ones that can be changed and used to better my art later. The Destiny series is one of the many franchises I truly love, and often pinch ideas from. In fact, everything I’ve ever done has already been invented, but it’s up to me, and other contemporary artists, to mix older elements in order to make a new and exciting product.

As for movies, they inspire me on an emotional level rather than a technical one. I decided that I will never work for the film industry because I do not want to lose this feeling.

We’re also big on movies here! What are some of your favorites?

I really like Ridley Scott’s Kingdom of Heaven, it’s got bright colours, great attention to detail and a stunning score. Still, I find myself ignoring all of the historical events in it and watching it purely for its visuals. I also love Skyfall because every single frame is perfection. Surprisingly, I didn’t come to realize this straight away. I had to re-watch it once or twice first.

Lastly, we’ve got Mad Max: Fury Road. This is easily this decade’s greatest film. But I am saddened by the fact that the best films were shot by the director’s from a past era. 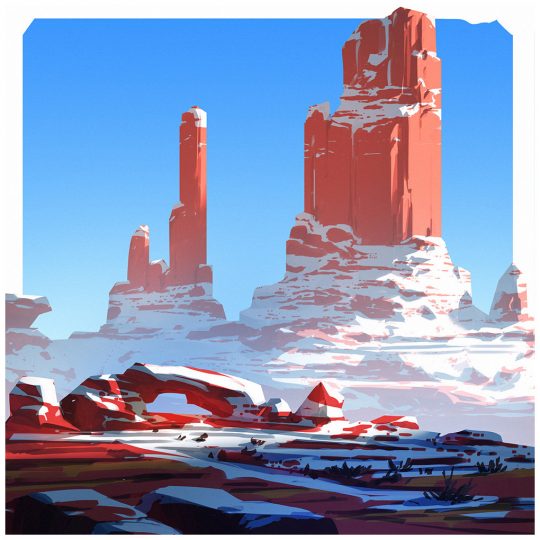 You’ve got a very unique art style. Can you describe how it evolved over time?

I wasn’t confident in myself as an artist for a long, long time, so I worked as a designer in order to make money. I was studying digital art independently in my spare time, and I feel that my main aim was to simplify my designs so that anyone could understand them. You can see how this affected my current colour palette.

Sometimes, I’ll work on a project where the genre is out of my comfort zone (fantasy) because I’m curious. I enjoy drawing Sci-Fi artwork for myself, but it’s only for practice!

Arkane Studios’ Dishonored series is often praised for its unique take on immersive dystopias, but without Cedric Peyravernay’s characters, the city of Dunwall would definitely lose half of its charm. This is why our next interview is all about character design, and yes, you guessed it, it’s an exclusive with Mr. Peyravernay himself.

Cedric is a freelance concept artist from Lyon, France. In addition to his work for Arkane Studios, he has also made art for 2K Games, Blur Studio and Warner Bros. in the past. His remarkable painterly style allowed him to make waves on various social media platforms, garnering the attention of millions of art enthusiasts around the world. And for good reason. We feel that his personal art is a prime example of good storytelling, and that extra layer of intrigue makes a painting very, very interesting. Thankfully, he’s going to walk us through his creative process, so maybe you’ll learn a thing or two about all of this!

If you’re a fan of Cedric’s work, stick around, because this interview will be published on Vox Groovy soon!

Tell us a little bit about your work on DUELYST.

Keith Lee sent me a private message on CGHub, asking me to prepare a series of images for the game’s Kickstarter campaign before it launched. I was so surprised at the time because I honestly thought that my portfolio was terrible. Keith didn’t seem to think so, though, and I was offered to continue working on DUELYST after completing that first gig. After that, I designed the game’s logo and various other things I can’t seem to remember anymore.

I don’t know how many of you know, but Keith came up with this world and its lore from beginning to end. And what happened is that I was given almost complete creative freedom after he polished the rougher ideas. It was a lot of fun, seeing how this world changed in accordance to my drawings. The ‘Whistling Blades’ artwork is a good example of this. I was tasked with drawing a bamboo forest, and I thought that it’d be possible to tack on a story about a terrible creature that lives there. It was like an ant, but far quicker and bloodthirsty. This character was then added into the game.

What kind of projects are you wanting to do in the future?

I’d love to work on a re-make of Prince of Persia: The Sands of Time with Dark Souls’ gameplay. That would be so cool! Still, it’s just a dream, and it will most likely stay that way. Realistically, I would want to work on Dragon Age 4 because I could see myself adapting to this games’ style very quickly. Although, like many artists, I also have a personal project I like to develop.

My project is based around a banal story about a hero who does not want to be a hero. I want to show a world that exists on top of an ancient state. There, a number of countries fight for control over certain resources in the ancient state’s territory. You will learn about how this place came to ruin and how the hero’s story interlinks with the ruins.

Perhaps it’s a useless answer. I am preparing the art for an animated trailer, but I don’t want to share too many details about it yet.

Walk us through the processes you used to create your favourite portfolio artwork.

I tend to mix other people’s ideas together in order to make my own. I usually start with large brushstrokes if I don’t have a clear idea in my mind. You’ll see me looking for interesting shapes and avoiding detail. I think that there has to be a clear boundary between the background, midground and foreground, and I can see that in all of my works. Lastly, after all of that is ready, I make a 3D scene for the lights and shadows because it’s much easier than trying to figure it out yourself. It also allows you to control the colour palette at any given stage. 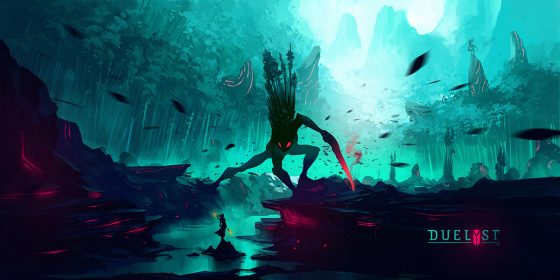 What’s next for Anton Fadeev?

I used to plan my life, but something always happens and changes everything. Now, I just set myself a goal and work on it without scheduling. Four years ago, I wouldn’t have expected to work as a concept artist, and I definitely didn’t expect to move to a new city twice! Maybe my whole life will change in a months’ time. Who knows, right?

All images used with permission by the artist.
© Anton Fadeev or respective copyright holders.