Grace Liu on the Art Behind Uniquely Stylized Games

The new Battle Chasers: Night War (2017) is a unique RPG game that needs its artists to work in a very specific art style—an art style like Grace Liu’s. It’s no surprise that hand-painted low-poly 3D will always feel at home in a stylized game, and that’s why the vast majority of you might have seen Liu’s work in games like Diablo III (2012) and League of Legends (2009). With nine years’ worth of experience and the opportunity to work at Blizzard Entertainment, Riot Games and Airship Syndicate, I’m sure that she has a lot to teach us all.

It’s interesting to note that Liu worked at Riot Games back in 2013, meaning that she was right on time to join in on the 2014 Summoner’s Rift update. Maybe, after reading this exclusive interview, you’ll be making your way past the blue buff with her in mind, as she was responsible for a number of our favourite jungle islands’ compositions, and the 1st and 2nd passes of their construction. This brings me to my next point: Liu’s ability to work in 3D is something that allows her to make headway in a very competitive industry. It goes without saying that AAA studios value artists who can take a concept and make it into a game-ready asset reliably. In the interview, Liu said that, “I find my 2D skills give me a lot of creative freedom when I work mostly in 3D, and my 3D experiences give my 2D concepts more practicality.”

I’d also like to point out that Geoffrey Ernault, a senior concept artist at Riot Games (who also worked on Battle Chasers: Night War), stressed how important the practicality of 2D concepts actually is. The player-base isn’t going to be made up of clairvoyant masterminds, so a concept artist who is ready to work in the industry has to think about things like clarity, context, gameplay, etc. This is one of the key differences between being a “real” game artist and someone who just draws “pretty” pictures. It’s also why I was so happy to see these two concept artists who’ve worked for some of the best game companies in the USA come out with this shared design philosophy.

Of course, that’s not the be-all and end-all of stylized art. So, if you’re someone who is looking to work on uniquely stylized games, then I hope that you can take something useful away from a good talk with a talented artist like Grace Liu.

I’ve always loved manga and games. I think the first time I tried digital art—using a mouse—was after seeing someone else post their work on a gaming bulletin board when I was in high-school. Things got more serious when I had the chance to use a Wacom tablet for a college course. I was very careful with my money, but I made the decision to buy one after the class was over, and began doing bad World of Warcraft fan-art immediately. 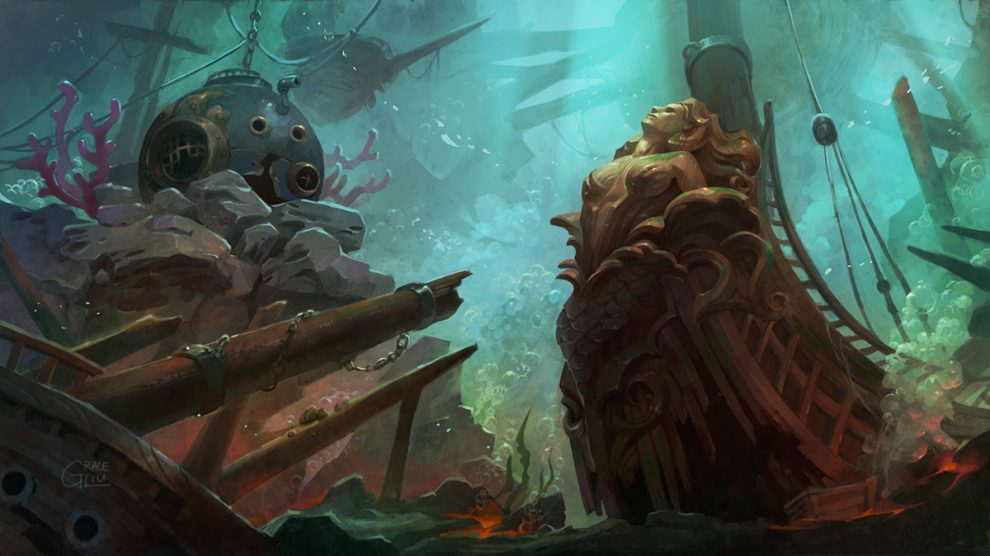 Beneath the Waves – Garden of Buried Hopes

I’m not sure I have a style, but my friends often tell me they recognize my work. I have never purposefully tried to guide my style, so I believe my “style” might simply be a mixture of my unique technical mistakes, personal way of seeing things, plus lots of influences from artists I like. 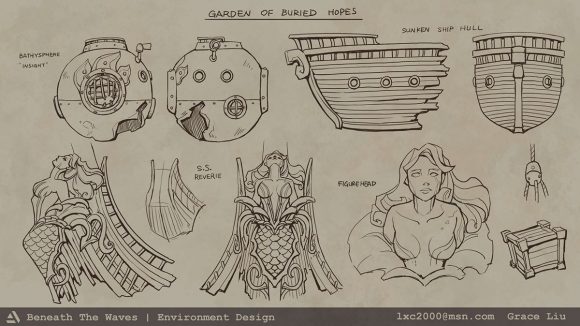 Beneath the Waves… / Environment Design

Tell us a little bit about your work on Battle Chasers: Night War.

Battle Chasers: Night War was in every way a dream project for me. I had a lot of freedom on environment concepts, got great art directions, made a lot of the environment assets, made many of the combat backgrounds and environment illustrations, colored some of Joe Mad’s amazing character illustrations and concepts, made the world map, and last but not least, I helped with the fishing mini game. The small team size meant I got to wear many hats and try many things. I had a lot of fun and learned a ton.

I saw the 3D work you did for Battle Chasers too. Is it important for a 2D artist to have a solid grasp of 3D?

I got hired into the industry as a 3D artist who can also concept, and have been a hybrid since. I think hybrid artists are relatively rare, and not universally necessary, but I find my 2D skills give me a lot of creative freedom when I work mostly in 3D, and my 3D experiences give my 2D concepts more practicality. I also enjoy being able to contribute both to pre-production and production phases of the project. Being able to both visualize the initial concept and also have a hand in bringing the final assets into games is a very satisfying experience.

Think about story and emotion first, then about the actual content!

It is easy to get into the details of a design too early during a concept’s development. A good design lives and dies by its concept, and the high level concept is always about shapes, values, contrast and clear readability. You can always decide what a shape is actually supposed to be once your big read is in place.

Try to think as high level as possible at all times. If a shape or value decision doesn’t help the story or emotion, does it need to be added? Ask yourself all the time if your decisions are based on your concept or on you just liking that.

I usually start with either pencil or digital doodles, just letting my brain loose in order to go through a round of pretty terrible sketches. I would hopefully find a few nuggets of ideas in there and begin seriously digging through references. I don’t have very tidy linework and often give up on the drawing stage a little prematurely to figure things out in the painting stage. This is a fairly inefficient process but I find myself thinking clearer in values and colors than I do in lines.

Which contemporary comics artist impresses you the most and why?

Do I get brownie points for saying Joe Mad? Seriously though, as someone relatively uninitiated to American comics, I find Joe’s art very attractive, possibly because I can see the manga influence in his work, but also the organic feeling of his pencil lines.

I know a lot of artists who dream of working at Riot Games someday. Please tell us a little bit about your experiences working as a Senior Environment Artist at Riot. Did you learn a lot from the team? Were there any memorable challenges that you had to tackle?

I worked on the Summoner’s Rift map update with a group of some of the most talented and passionate people I’ve ever met. The level of care the team put into delivering quality content as well as actually communicating with and listening to players left a lasting impression. Some of the most memorable moments happened during our internal game jams, which were 2-3 day events that happened 2-3 times a year, during which people freely formed teams to work on whatever they wanted, from technology and tools to entire mini games to more game modes for LoL. People were so passionate about the project that many stayed for all-nighters, and as the nights turned to early mornings, the jokes get sillier but somehow funnier.

Please give us your No. 1 piece of advice for aspiring artists who are looking to break into the industry.

Have a goal. I should be able to look at your portfolio and quickly have an idea of what kind of artist you are, what types of teams you may fit in, and where you are trying to go with your art. One of the major goals every aspiring artist should have is making a professional level, rather than a student level portfolio. As you get out of schools, you will be competing on a professional level, and your work should be at least almost ready to go into actual games.

What are your thoughts on the current state of art in the game industry?

The bars are constantly rising and there are so many super impressive, creative, productive artists out there. Comparing to just 10 years ago, art talent in the game industry has overall leveled up several times over. It’s both a bit scary and also super inspiring to look around and discover several artists with amazing work every week. I personally love this feeling.

What’s next for Grace Liu?

That’s a great question. I was asked this question during my interview at Blizzard for the Diablo 3 team almost 8 years ago, and my answer today is the same with my answer then: I will hopefully always be making games I love with a team of people who care. Exactly what and where isn’t as important. I hope I will always be surrounded by people who motivate each other to get better.

All images used with permission by the artist.
© Grace Liu or respective copyright holders.